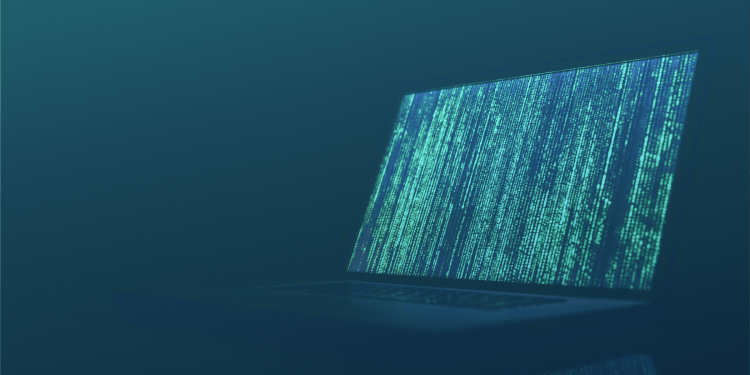 Top 5 Security and Data Breaches in 2020

In 2020, due to the pandemic, almost everything shifted from offline to online. This change opened a door for more complex cyber-attacks. No matter the business industry or company size, application security solutions became a top priority for business owners. The most extensive data breaches happened in 2020. Cybercriminals targeted several Fortune 500 companies. They could access and sell account credentials, sensitive data, confidential information and financial records of these businesses, causing severe damages and substantial monetary losses.

In this article, we will talk about the biggest data breaches in 2020, including the type of attacks, losses, and takeaways. Follow along for more information.

What Are Security and Data Breaches? 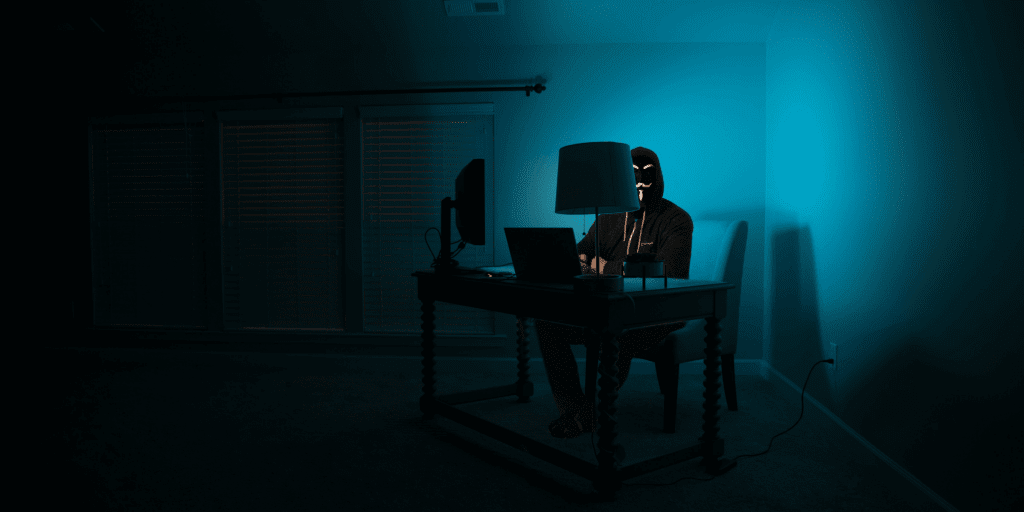 Any event that results in illegal or unapproved access to computer data, networks, devices or applications is called a security breach. The intruder can access every piece of information without authorization by hacking the security mechanism. It is important to emphasize the distinction between a security breach and a data breach. A security breach is a security incident where hackers break into your website, network, device, application, or computer but do not steal any sensitive data. A data breach is when the cyber attacker is getting away with information.

You must know that confidential information has tremendous value as they are often sold on the dark web. Sensitive data such as credit card numbers and names are often used to identify theft and fraud. Security breaches often cause companies huge monetary losses. On average, for major corporations, the damages are almost 4 million dollars.

The Most Common Security and Data Breaches

There are numerous types of security breaches or data breaches that hackers use to affect major or minor organizations. Still, at the same time, they can be used by malicious actors to break into individual’s computers and devices. Let’s explore together the most common types of cyber threats and attacks. 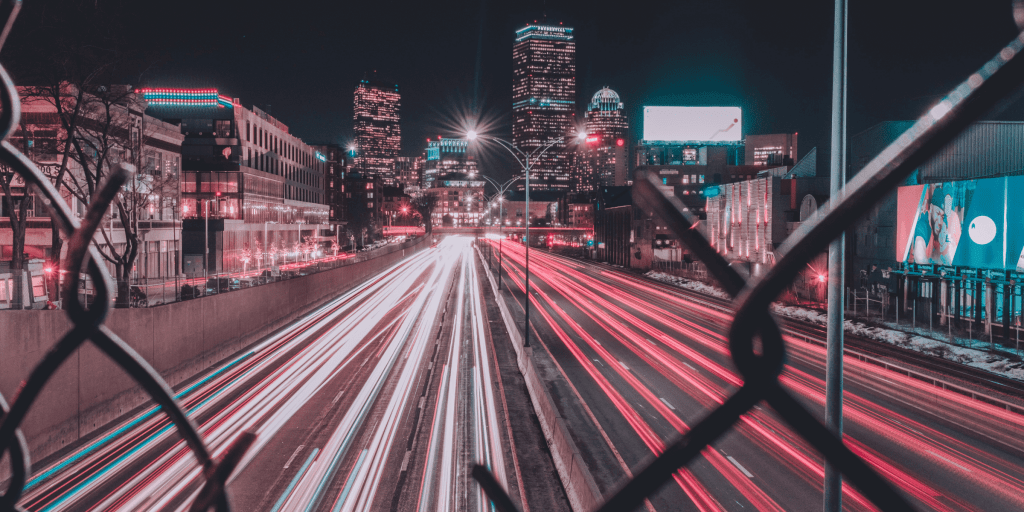 Based on how the cyber-attack is designed to get access to the system, the most used techniques are: 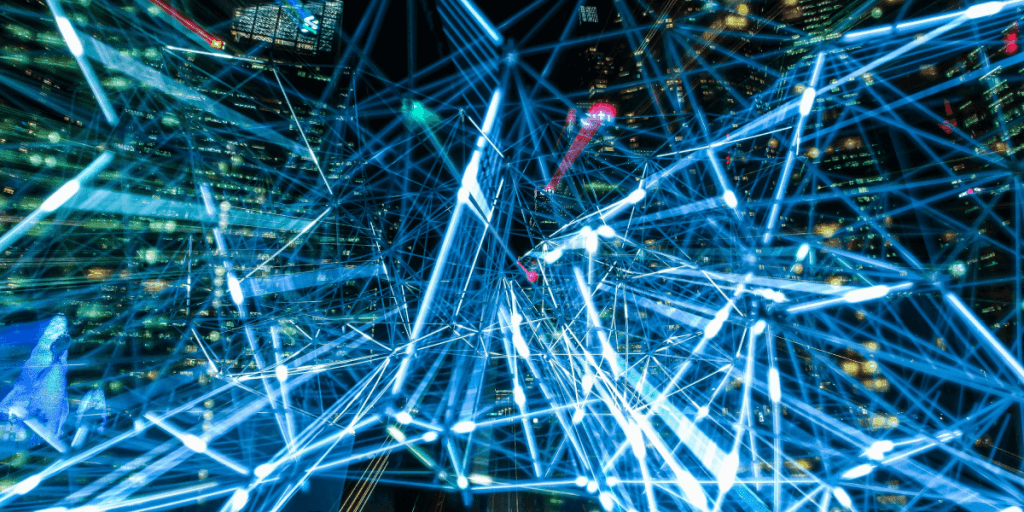 For a data breach to happen, it is often necessary for a cybersecurity incident to occur and result in a security breach. It would be best if you remembered that no company is immune to data breaches, and you will read all about that in the next section of this article.

Now, let’s see what the most common data breaches that companies have to avoid are:

Top 5 Security and Data Breaches in 2020 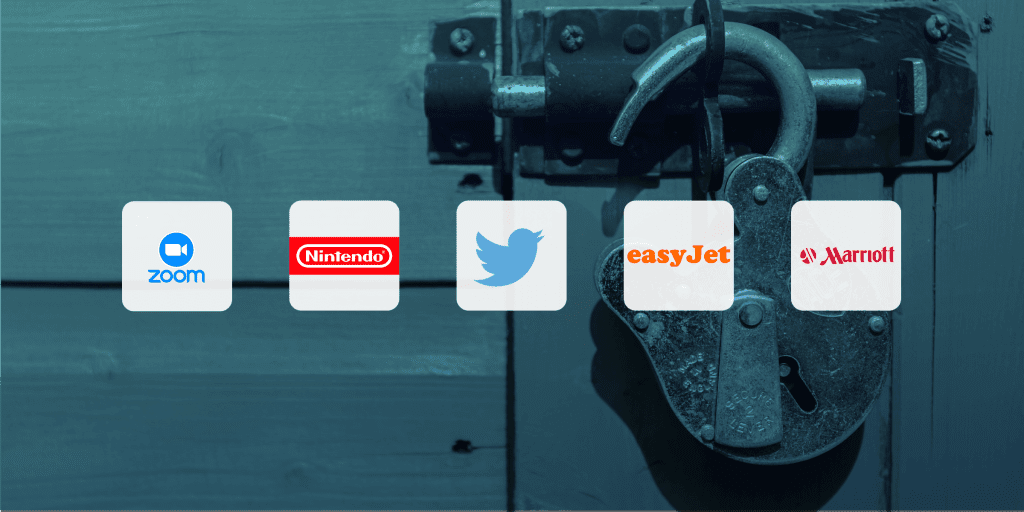 Analyzing or looking for patterns and trends in the breaches from previous years can help inform, educate consumers and businesses about the importance of protecting personal data. When sensitive data is compromised, not only your company but your customers are exposed to great damages. For example, more than 3.2 million customer records were exposed in the ten biggest data breaches in the first six months of 2020.

Now let’s talk about the top 5 security and data breaches in 2020. The companies that were targeted are among the largest businesses in the world. We are going to talk about Zoom, Nintendo, easyJet, Marriott Hotel Group and Twitter.

The Zoom credential hack happened in the first week of April 2020, and more than 500.000 were reported to be available for purchase on the dark web. This issue concerned especially the new users of the app. The credentials were given away for free, and others were sold at a penny each. Malicious hackers leaked a wide range of sensitive information such as username, passwords, registered email addresses, host keys and personal meeting URLs. Those credentials gave the malicious actors access to the account and any contents the users might have hosted or been part of. It is very plausible that the total number of compromised users is greater than the number of accounts for sale on the dark web.

Another major data breach that happened in April 2020 had as a victim one of the gaming giants: Nintendo. More than 160.000 user accounts were put in jeopardy in a single attack. Hackers launched the credential stuffing attack and used the online accounts to buy digital products using the Nintendo network. After the cyber attack, Nintendo eliminated the log in through the Nintendo Network ID (NNID) and recommended users to use two-factor authentication methods to secure their data better. The compromised data included: account passwords, account owner names, dates of birth, country, and email address.

Credential stuffing attacks are common in the gaming and media industries. Over the years, Disney, Spotify and Netflix, all fell victim to this type of hack.

easyJet is a UK-based low-cost airline that has been plagued by a cyber attack, where millions of users had their data records stolen. Based on the declaration of easyJet, 9 million customer’s personal data were compromised, and 2.200 had their credit card details exposed. Because of Europe’s stringent GDPR rules, companies that violate data protection regulations are in for serious penalties. PGMBM filed a class-action lawsuit on behalf of the EasyJet victims for 23 billion dollars (18 billion pounds).

Even though easyJet has reported the matter to regulatory authorities and the Information Commissioner’s Office, the airline was too slow to inform its customers about the data breach. Some customers have found out about the cyber incident after almost four months. This is one of the biggest cybersecurity attacks and data breaches in the airline industry.

Marriott was the victim of a significant data breach in March of 2020, where records of 5.2 million hotel guests were compromised. The attackers managed to obtain data from millions of users by hacking the user credentials of two Marriott Hotel Group employees. This social engineering attack highlights the importance of multi-factor authentication among the company’s employees. The hackers stole sensitive data, including names, mailing addresses, email addresses, phone numbers, gender, loyalty account information and dates of birth.

On the 15th of July 2020, Twitter underwent a security breach called a phone spear-phishing attack. The threat actors used employee credentials to access the internal system. After gaining access to the platform, they targeted 130 high-profile Twitter accounts such as Barack Obama, Bill Gates, Elon Musk, and more. The hackers tweeted from 45 accounts, accessed the direct messaging inbox of 36 accounts and downloaded Twitter data of 7 accounts.

The tweet below was shared on several high-profile accounts, and it reached more than 350 million people. The tweet resulted in the recovery of 121.000 dollars (in bitcoin) in stolen “donations” within hours. 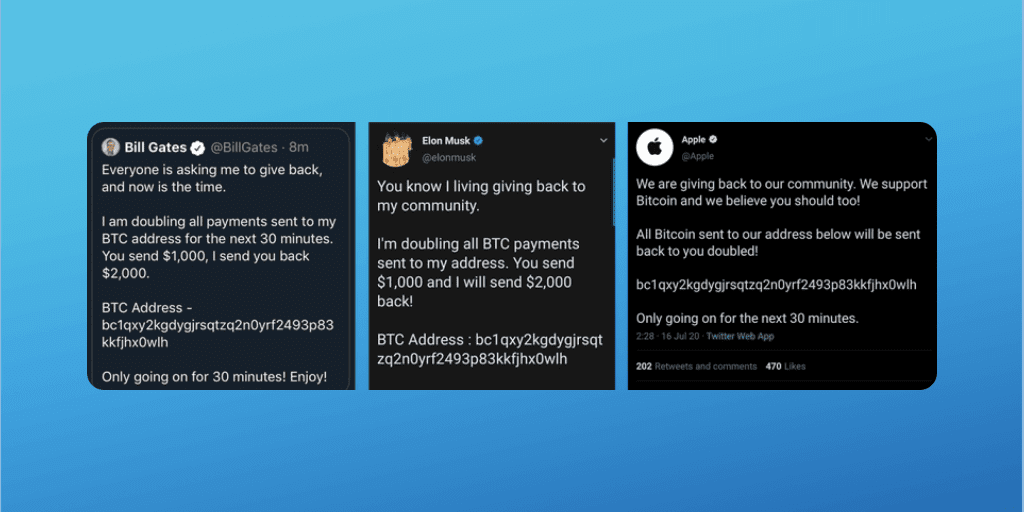 Twitter addressed this attack later on and described it as social engineering. The cybercriminals used psychological manipulation to trick and mislead employees and exploit human vulnerabilities to gain access to the platform and steal a wide range of sensitive information.

Other 5 Security and Data Breaches of 2020 Worth Mentioning

On our list of data and security breaches of 2020, we would like to include other 5 instances where millions of users were exposed to data leaks.

StealthLabs created the following infographic with the 25 most overwhelming data breaches that made the headlines in 2020: 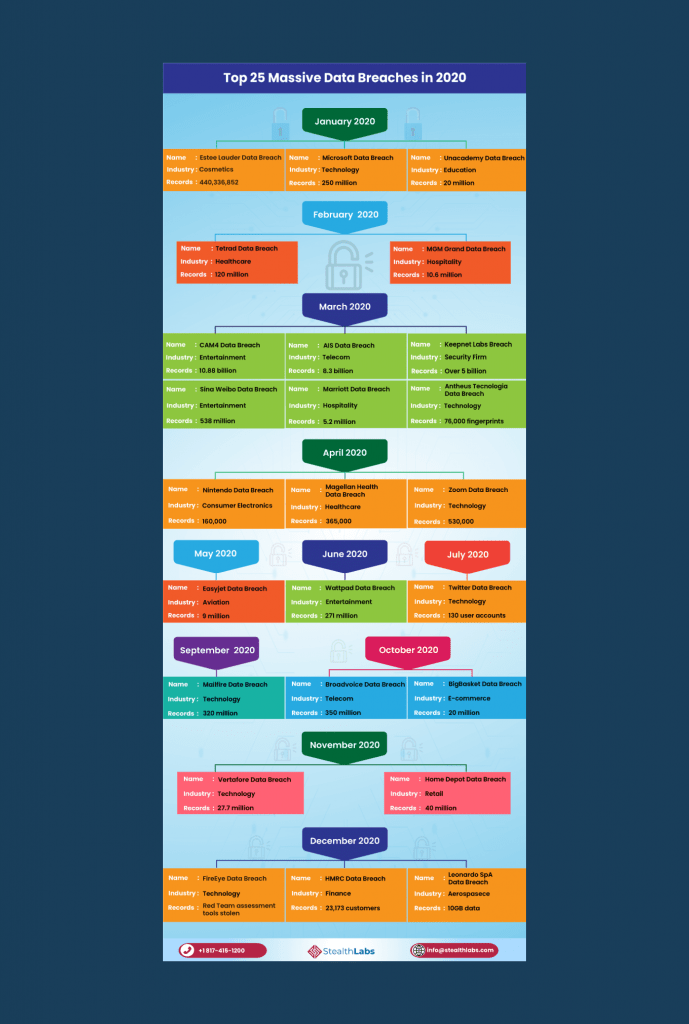 Our Advice – How to Avoid Any Breaches

When we look at the most significant data breaches from 2020, most of them happened because of negligence.  Application security solutions are the smartest move that you can make to protect your business from any security issue that hackers can exploit.

In 2020, cybersecurity was pretty challenging for any organization, no matter its size or industry. Unfortunately, many companies are not prepared to handle a significant cybersecurity incident. According to the Ponemon Institute, 77% of organizations do not have a CSIRP (Cybersecurity Incident Response Plan).

To prevent data and security breaches, we have some recommendations you can implement:

We think that this “explosion” in cybersecurity incidents happened because the remote working environment was implemented very suddenly in 2020. Many companies were not prepared for this switch and did not have the remote networking capabilities shielded. Because of this shift, many businesses left unsecured gaps that hackers could exploit for their financial gain or disrupt the operations’ flow.

The priority now is to eliminate any vulnerability and to implement stronger security protocols.

We can help you with application security solutions, fix any gap in your endpoints, identify and eliminate vulnerabilities. Contact us today, and let’s make sure you have a strong security protocol in place, your business is secure, and you are protected against any unauthorized party accessing your systems.

How hard is it for hackers to break into a company’s system, network, or server?

Very easy if they find vulnerabilities to exploit. Usually, it takes almost four steps to access your systems.

What are the most popular techniques of cyber-attacks?

Depends on what the hacker wants to obtain. From what we saw, they prefer techniques such as phishing, social engineering and credential stuffing.

What is the motivation behind a cyber attack?

The most frequent motivation is financial (86%).

Are all hackers malicious?

No. Security researchers (good hackers) want to make the internet a safer place, but some malicious people abuse their skills. 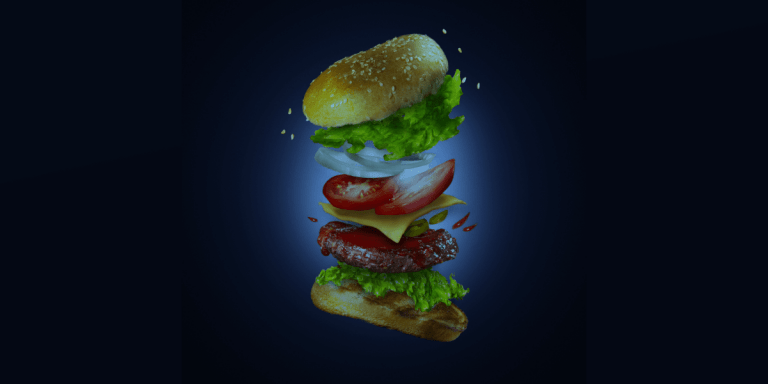 Should You Avoid Hamburger Menus on Desktop Websites? 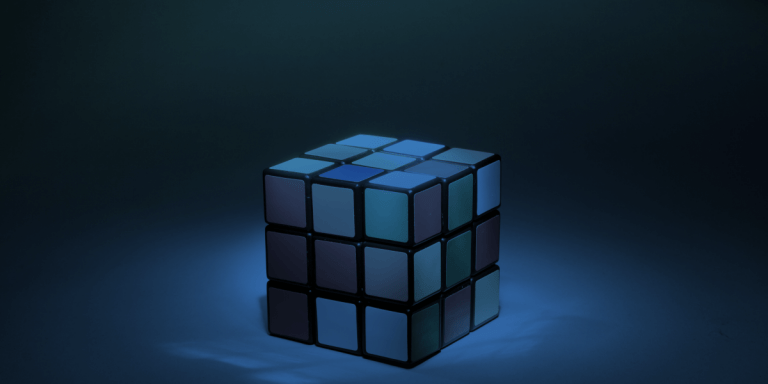 The Impact of Security Misconfiguration and How to Avoid It? 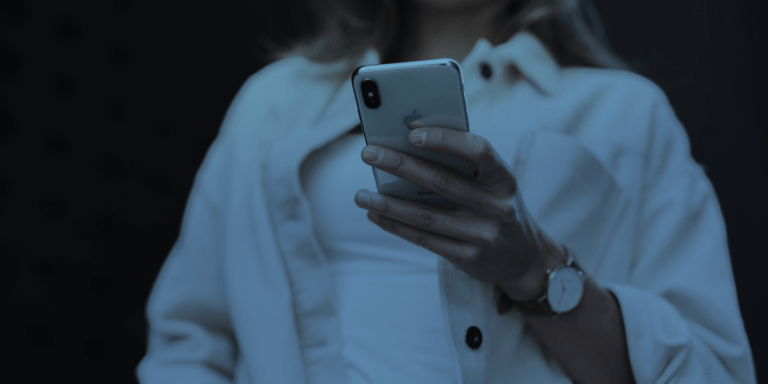 How to Build a Mobile Marketing Strategy to Ensure Business Success

Let's start working on your project!